Cults of the Severed Head 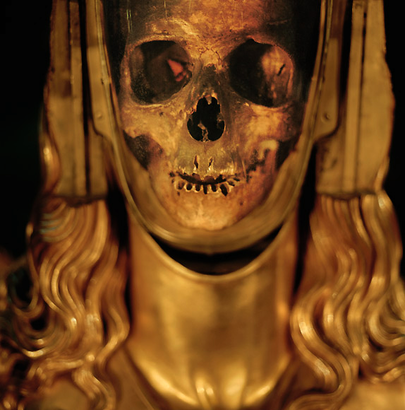 Disembodied Information
In the 'Cult of the Severed Head' in Provance, a head carved in stone was the repository of the soul and could live on and continue to speak to the living and prophesize. Such heads represented a medium for communication with the Other World, hinting at an older Celtic mythos and tradition -- cult of relics.

But the cults of Southern France may not correlate with those of Britain or the neolithic era and elsewhere as a coherent practice. Skull relics are still worshipped there with candles. The medieval town Saint-Maximin-la-Sainte-Baume has a basilica dedicated to Mary Magdalene; under the crypt there is a glass dome said to contain the blackened relic of her skull.

Neolithic Jericho had a mortuary practice of burying loved ones under their houses. Sometimes these bodies were complete and sometimes the severed head was removed and only the skull was buried after defleshing. Facial features were reconstructed with plaster to retain the identity of the family member, individual facial characteristics were painted on with red and black paint.  In many cases the eye orbits were inlaid with shells and the crania were decorated with hair and mustaches. (Kenyon)

The notion of a 'cult of the head' remains controversial, and yet that we imagine it was so is a modern reality. This powerful trope brings to mind cults of martyred saints who carry their immortalized heads and the alleged Templar worship of the head of John the Baptist, personifications of disembodied metaphysical entities -- an ancient equivalent of media 'talking heads' as culture leaders.

What we can take from this practice is the primacy of the psyche for personification. In the family tree we don't require the physical relic to honor the deceased, including the heads of the household. "To keep the light alive in the darkness, that's the point, and only there your candle makes sense." (Jung, Letters Vol. II, Pp. 133-138)