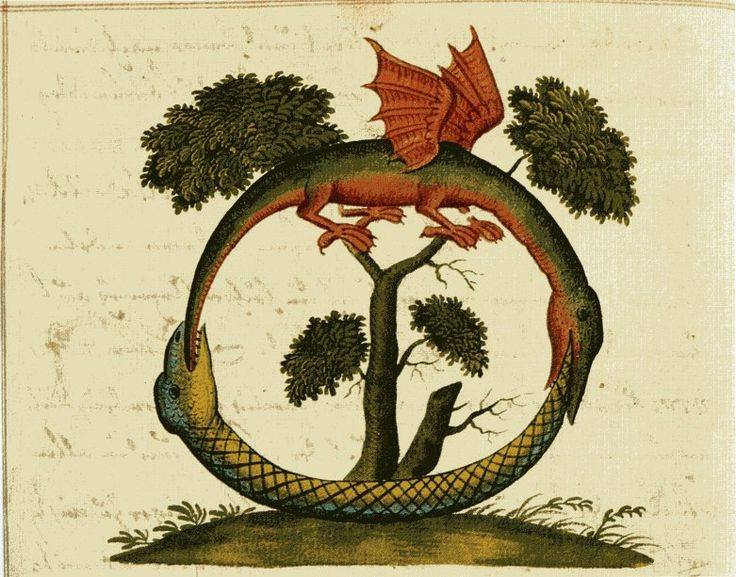 The serpent is the earthly essence of man of which he is not conscious. Its character changes according to peoples and lands, since it is the mystery that flows to him from the nourishing earth-mother. The earthly (numen loci) separates forethinking and pleasure in man, but not in itself. The serpent has the weight of the earth in itself but also its changeability and germination from which everything that becomes emerges. ~Carl Jung, The Red Book, Page 247.

Keep it far from me, science that clever knower, that bad prison master who binds the soul and imprisons it in a lightless cell. But above all protect me from the serpent of judgment, which only appears to be a healing serpent, yet in your depths is infernal poison and agonizing death. ~Carl Jung, The Red Book, Page 238

Keep it far from me, science that clever knower, that bad prison master who binds the soul and imprisons it in a lightless cell. But above all protect me from the serpent of judgment, which only appears to be a healing serpent, yet in your depths is infernal poison and agonizing death. ~Carl Jung, The Red Book, Page 238

Some have their reason in thinking, others in feeling. Both are servants of Logos, and in secret become worshipers of the serpent. ~Carl Jung, The Red Book, Page 280.

More especially the threat to one’s inmost self from dragons and serpents points to the danger of the newly acquired consciousness being swallowed up again by the instinctive psyche, the unconscious. ~Carl Jung; CW 9i; para. 282.

More especially the threat to one’s inmost self from dragons and serpents points to the danger of the newly acquired consciousness being swallowed up again by the instinctive psyche, the unconscious. ~Carl Jung; CW 9i; para. 282.

Through the Christ crucified between the two thieves, man gradually attained knowledge of his shadow and its duality. This duality had already been anticipated by the double meaning of the serpent. Just as the serpent stands for the power that heals as well as corrupts, so one of the thieves is destined upwards, the other downwards, and so likewise the shadow is on one side regrettable and reprehensible weakness, on the other side healthy instinctively and the prerequisite for higher consciousness. ~Carl Jung; Aion; Page 255; Para 402.

Taking it in its deepest sense, the shadow is the invisible saurian tail that man still drags behind him. Carefully amputated, it becomes the healing serpent of the mysteries. Only monkeys parade with it. ~Carl Jung; The Integration of the Personality.

The idea of transformation and renewal by means of the serpent is a well-substantiated archetype. It is [a] healing [symbol] ~Carl Jung, CW 7, Par 184.

The second part of it, the secretary-bird and the snake, has been correctly interpreted, in spite of the fact that the snake is not exactly Kundalini because the Kundalini serpent actually dissolves into light. ~Carl Jung, Letters Vol. 1, Pages 95-97.

The serpent is a Gnostic symbol for the spinal cord and the basal ganglia, because a snake is mainly backbone. ~Carl Jung, ETH, Lecture XI, Page 97.

The spirit is usually expressed by a serpent which proves that this spirit is not Just the human mind, but an animal or reptile mind. ~Carl Jung, ETH, Lecture XIII, Page 111.

We must assume, therefore, that the spirit has two aspects in alchemy, the human mind as we know it, and the serpent mind, which we can only say is unconscious. ~Carl Jung, ETH, Lecture XIII, Page 111.

Nothing makes this effect clearer than the serpent. It signifies everything dangerous and everything bad, everything nocturnal and uncanny, which adheres to Logos as well as to Eros, so long as they can work as the dark and unrecognized principles of the unconscious spirit. ~Carl Jung, Liber Novus, Page 365.

The snake in alchemy is the "mercurial serpent", the old Gnostic image for the Nous, the mind, where the spirit was represented as a serpent, as the Agathodaemon (the good daemon), or directly called the serpent of the Nous. ~Carl Jung, ETH, Alchemy, Page 215.

This serpent does not represent "reason" or anything approaching it, but rather symbolises a peculiar autonomous mind which can possess one completely, a spirit of revelation which gives us "Intuitionen" (intuitions). ~Carl Jung, ETH, Alchemy, Page 215.

Since the time of the old Gnostics, the serpent has been the symbol for the brain and its appendages; that is, for the lower centres of the brain and for the spinal cord, partly on account of its shape, but also from introspective reasons. ~Carl Jung, ETH, Alchemy, Page 216.

…the serpent is the hypostatic, underlying materia (the essence of matter), which sinks into the water, or is as it were in the water, and, through illusion, it deceives the senses. ~Carl Jung, ETH, Alchemy, Page 219.

On the night when I considered the essence of the God, I became aware of an image: I lay in a dark depth. An old man stood before me. He looked like one of the old prophets. A black serpent lay at his feet. Some distance away I saw a house with columns. A beautiful maiden steps out of the door. ~Carl Jung, Liber Novus, Page 245.
As I look into its reflection, the images of Eve, the tree, and the serpent appear to me. After this I catch sight of Odysseus and his journey on the high seas. ~Carl Jung, Liber Novus, Page 245.

The Corrected Draft continues: "The serpent is not only a separating but also a unifying principle" (p. 91). ~Carl Jung, Liber Novus, Page 247, Footnote 172.

He [Jung] showed a diagram of a cross with Rational/Thinking (Elijah) at the top, Feeling (Salome) at the bottom, Irrational / Intuition (Superior) at the left, and Sensation / Inferior (Serpent) at the right. ~The Red Book, Page 247, Footnote 173.

If pleasure is united with forethinking, the serpent lies before them. ~Carl Jung, Liber Novus, Page 249, Footnote 190.

Christ himself compared himself to a serpent, and his hellish brother, the Antichrist, is the old dragon himself. ~Carl Jung, Liber Novus, Page 318.

But above all protect me from the serpent of judgment, which only appears to be a healing serpent, yet in your depths is infernal poison and agonizing death. ~Carl Jung, Liber Novus, Page 238.

But the serpent is also life. In the image furnished by the ancients, the serpent put an end to the childlike magnificence of paradise; they even said that Christ himself had been a serpent. ~Carl Jung, Liber Novus, Footnote 136, Page 243.

Alas, he is my dearest, most beautiful friend, he who rushes across, pursuing the sun and wanting to marry himself with the immeasurable mother as the sun does. How closely akin, indeed how completely one are the serpent and the God! The word which was our deliverer has become a deadly weapon, a serpent that secretly stabs. ~Carl Jung on Izdubar, Liber Novus, Page 280.

The ancients called the saving word the Logos, an expression of divine reason. So much unreason / was in man that he needed reason to be saved. ~Carl Jung, Liber Novus, Page 280.

If one waits long enough, one sees how the Gods all change into serpents and underworld dragons in the end. This is also the fate of the Logos: in the end it poisons us all. ~Carl Jung, Liber Novus, Page 280.

Some have their reason in thinking, others in feeling. Both are servants of Logos, and in secret become worshipers of the serpent. ~Carl Jung, Liber Novus, Page 280.

Many have wanted to get help for their sick God and were then devoured by the serpents and dragons lurking on the way to the land of the sun. ~Carl Jung, Liber Novus, Page 283.

Birth is difficult, but a thousand times more difficult is the hellish afterbirth. All the dragons and monstrous serpents of eternal emptiness follow behind the divine son. ~Carl Jung, Liber Novus, Page 287.

If I am not conjoined through the uniting of the Below and the Above, I break down into three parts: the serpent, and in that or some other animal form I roam, living nature daimonically, arousing fear and longing. The human soul, living forever within you. The celestial soul, as such dwelling with the Gods, far from you and unknown to you, appearing in the form of a bird. ~Carl Jung’s Soul to him, Black Books, Appendix C., Page 370.

Apart from Elijah and Salome I found the serpent as a third principle. It is a stranger to both principles although it is associated with both. The serpent taught me the unconditional difference in essence between the two principles in me. ~Carl Jung and Elijah, Liber Novus, Page 247.

Because I was a thinker and caught sight of the hostile principle of pleasure from forethinking, it appeared to me as Salome. If I had been one who felt, and had groped my way toward forethinking, then it would have appeared to me as a serpent-encoiled daimon, if I had actually seen it. ~Carl Jung and Elijah, Liber Novus, Page 248.

The serpent in the cave is an image which often occurs in antiquity. It is important to realize that in classical antiquity, as in other civilizations, the serpent not only was an animal that aroused fear and represented danger, but also signified healing. ~Carl Jung, CW 18, Page 116.