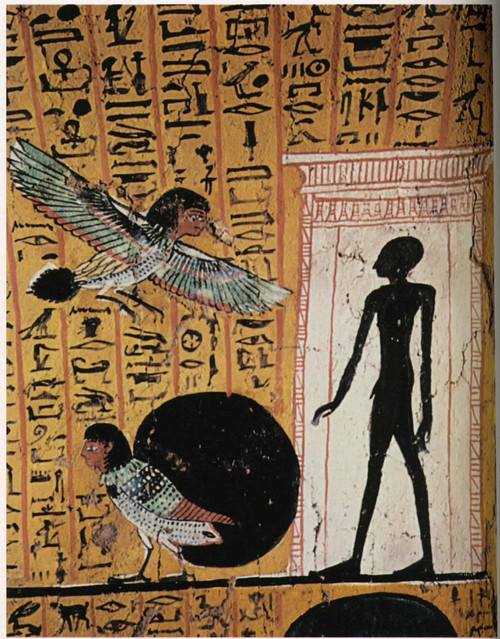 The House of Life was the center of cultural endeavor to preserve and ensure the ongoing progress of cosmic, political, and social life. A holy place and scriptorium, The House of Life contained secret, magical writings the Egyptians believed had the power to renew and sustain life and further the rebirth of Osiris at his annual festival.

The significance of the House of Life and the rituals performed there was universal. Like the temples it stood for the whole creation, just as the reborn Osiris symbolized eternal life in general. According to tradition, time and again people went to the House of Life to consult ancient writings when they needed answers to problems of their day.

In ancient Egyptian writings and architecture, the House of Life was an institution aligned with kingship, preserving and creating knowledge in written and pictorial form. The overseer of the private rooms of the king, bore the title of 'overseer of writing in the House of Life, a man to whom all sacred matters are revealed', and 'keeper of secrets of the House of Life'.

The ancient Egyptian civilization was strongly connected with nature and the Universe that surrounded them. The school of Abydos, the House of Life, attracted many healers in the course of time and became very important as a base of knowledge about healing and medicines. They were well aware of the functioning of the human body and had well educated specialized doctors. Mind and body were strongly connected. A sound mind lives in a sound body. Therefore they created various ways to maintain a sound condition of the physical body. They analyzed the plants in their neighborhood and built various schools.

The Per Ankh, House of Life, is a solar temple of sacred science (mystery school) and an institution of learning, healing and training. The House of Life, (Per Ankh), is an organization of Egyptian Magicians, founded by the God of Learning, Thoth. The Per-Ankh served as the library of Egyptian temples. There various texts were transcribed and kept by scribes, including the “books of the dead”. The House of Life was also a center of esoteric training where students may have undertaken a course of spiritual development, resulting in initiations into “various degrees of symbolic death and rebirth”.
https://books.google.com/books?id=WRfHSnGlX7QC&pg=PA216&lpg=PA216&dq=per+ankh+house+of+life&source=bl&ots=kjNlwISk85&sig=frZYvP2n-r_h2Scl3GlywnqjXBc&hl=en&sa=X&ved=0ahUKEwiLr_Ch_KLLAhXH6CYKHWVKATg4FBDoAQgzMAU#v=onepage&q=per%20ankh%20house%20of%20life&f=false

Although schools did not exist, the House of Life was an institution that provided some education and training for a select few. A House of Life was attached to most temples. Each stored a number of texts relevant to that particular temple. The term is often mistranslated as a school, university, library, or archive. However, it was a strange institution that was all of these things and yet did not fit any of the descriptions particularly well. Although shrouded (intentionally) in mystery, the following is known about this institution:
THE QUICK & THE DEAD
The Last Branch Supports Me

Individuation is a natural process. It is what makes a tree turn into a tree; if it is interfered with, then it becomes sick and cannot function as a tree, but left to itself it develops into a tree. That is individuation.
--Jung, C.G. Jung Speaking; Interviews and Encounters, Pages 205-218

Because of the way genetics and family trees work, every single human alive on the planet today can trace their family lines back to one common ancestor, one who lived from 8,000-2,000 years ago. As observed in a 2004 paper on the Most Recent Common Ancestor:

“No matter the languages we speak or the color of our skin, we share ancestors who planted rice on the banks of the Yangtze, who first domesticated horses on the steppes of the Ukraine, who hunted giant sloths in the forests of North and South America, and who labored to build the Great Pyramid of Khufu.”

NEXT OF KIN
Last Twig On the Branch
Invisible Loyalties

STAY WITH THE LIVING
We Are Alive; It's All We Know
Life is a luminous pause between two great mysteries,
which themselves are one. --C.G. Jung

Over the course of the millennia, all these ancestors in your tree, generation upon generation, have come down to this moment in time--to give birth to you. There has never been, nor will ever be, another like you. You have been given a tremendous responsibility. You carry the hopes and dreams of all those who have gone before. Hopes and dreams for a better world. What will you do with your time on this Earth? How will you contribute to the ongoing story of humankind? History remembers only the celebrated, genealogy remembers them all. --Laurence Overmire

“The neurosis is as a rule a pathological, one-sided development of the personality, the imperceptible beginnings of which can be traced back almost indefinitely into the earliest years of childhood.  Only a very arbitrary judgment can say where the neurosis actually begins.  If we were to relegate the determining cause as far back as the patient’s prenatal life, thus involving the physical and psychic disposition of the parents at the time of conception and pregnancy—a view that seems not at all improbable in certain cases—such an attitude would be more justifiable than the arbitrary selection of a definite point of neurotic origin in the individual life of the patient” (Jung, CW 16, 257-258).

"It isn’t primarily a practice of thinking of one’s last hour, or of death as a physical phenomenon; it is a seeing of every moment of life against the horizon of death, and a challenge to incorporate that awareness of dying into every moment so as to become more fully alive."
—Brother David Steindl-Rast Parabola, 1977.