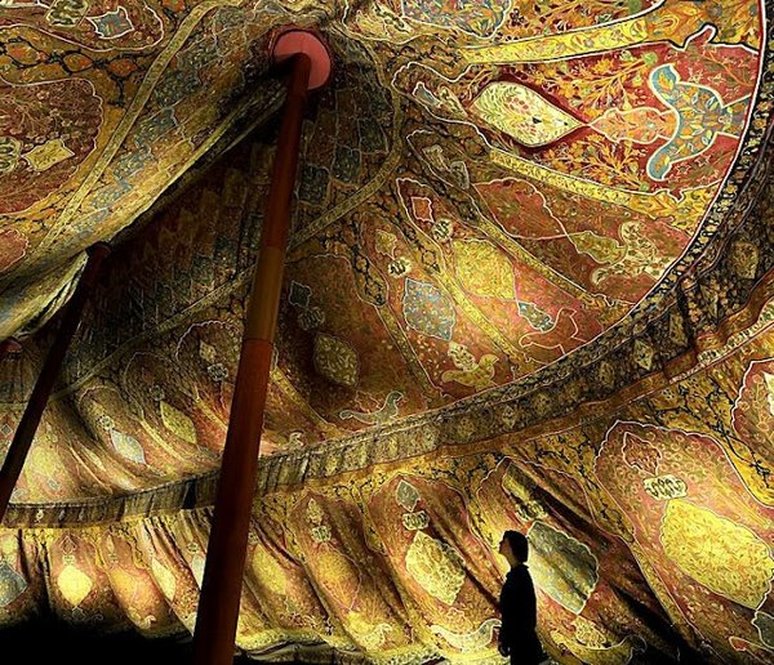 WHO IS IN YOUR TENT? 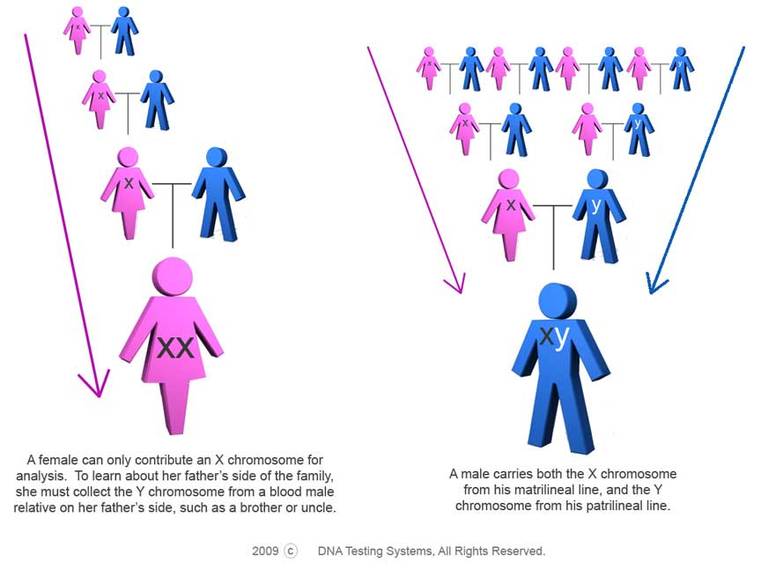 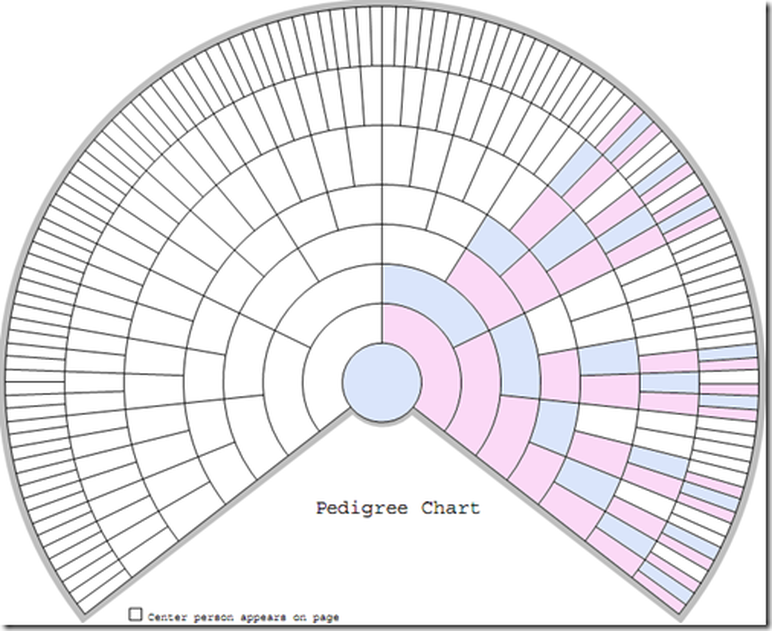 Male Inheritance  – Male contributors are in blue and female contributors are in pink:
Genetic genealogy can be extremely complicated, but most cases require only a basic understanding of our 23 pairs of chromosomes. Most chromosomes, you could say, are promiscuous. During the formation of egg and sperm, each chromosome inherited from the mother physically crosses with its counterpart from the father, and as the pieces mingle they freely exchange segments of DNA. This recombination gives our species great genetic diversity, and it’s the primary reason non-twin siblings are never genetically identical.

But the Y chromosome is chaste. The vast majority of its 50 million DNA letters do not swap with other chromosomes, passing almost identically from father to son, son to grandson, and so on. That means that when a genetic change spontaneously occurs in a Y chromosome, it can be passed down to male descendants forever, serving as a reliable marker of their paternal lineage.
Males, of course, have one Y chromosome from their father and one X chromosome from their mother.  Females have two X chromosomes, one from each parent. The charts below trace back the inheritance of the X chromosome through the level of GGGGG-grandparents.  At that generation, a person has 128 ancestors.  Of these 128 ancestors, a male will have 21 people who potentially contributed to their single X chromosome (8 males and 13 females).

At each generation, only 50% of a person’s DNA is passed to their children.  That 50% is almost completely random. Further, at about 5-9 generations, ancestors start to completely fall off your Genetic Family Tree.  This means that your Genetic Family Tree is a small subset of your Genealogical Family Tree, and without DNA testing you have no idea what subset that is.  You cannot predict your biogeographical estimate. You can make a rough approximation, but you cannot reject a reasonable biogeographical estimate based solely on what you think it should be. 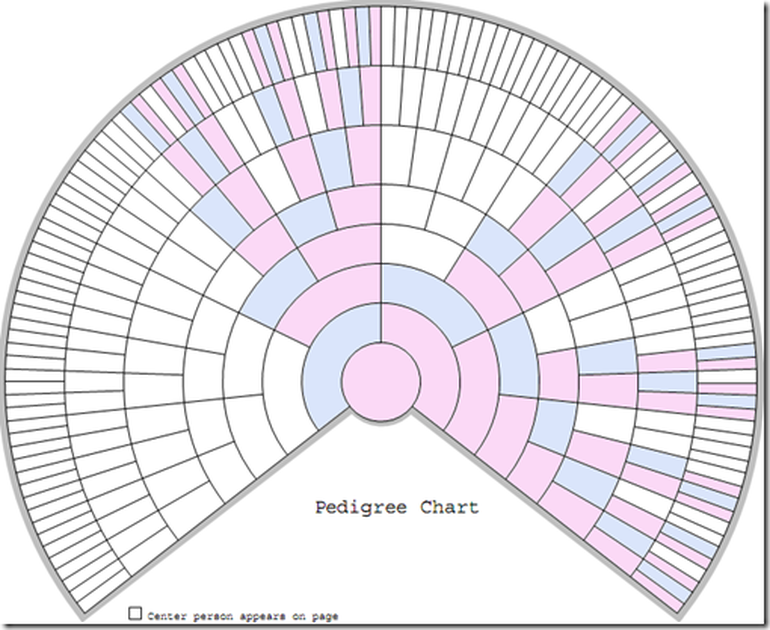 Genealogists now use molecular genealogy, comparing and matching people by matrilineal DNA lineages -- matrilineal mtDNA or patrilineal Y-chromosome ancestry, SNP, and/or autosomal tests. People interested in ancestry now look at genetic markers to trace the migrations of the human species. You can trace your genealogy by DNA from your grandparents back 10,000 or more years.

Anyone can be interested in DNA for ancestry research, learning how different populations from a mosaic of communities reached their current locations. From whom are you descended? What markers shed light on your deepest ancestry? You can study DNA for medical reasons or to discover the geographic travels and dwelling places of some of your ancestors. DNA does not target specific ancestors by name but does reveal rare genetic markers. Specifically, you can interpret your DNA test and/or genealogy for family history.

Particular genetic markers are called ancestry informative markers (AIM). They correlate with populations of specific geographical areas. Autosomal DNA shows the "genetic percentages" of a person's ancestry from particular continents/regions or identify the countries and "tribes" of origin. SNPs are locations on DNA where nucleotides have "mutated" or "switched" to a different nucleotide. Tests listing geographical places of origin use alleles. Individual and family variations on various chromosomes across the genome are analyzed with the aid of population databases.

Initiation opens a communication link between the aspirant and divine guiding principle -- our inner genius -- fostering balance in the personality as the firm foundation for spiritual development. Maat or 'Balance' was the prime expression of the Egyptian Mystery Schools, because it gave order and meaning to life.

In the East, it is called the Tao, a dynamic blending of yin and yang. In Kabbalah, it is the Middle Way. Balance helps us to achieve the goals we want in life and to manifest our dreams. You can easily integrate this wisdom tradition in your own householder life. Empowerment comes through grounding and centering

Such knowledge transforms and activates a new level of Being, internally and in the world, at large. The Grail has come calling and collected its own, informing our sparks of consciousness with a connection to hyperdimensional depth, with a sense of mission and purpose, with a commitment to the recovery of our self-awareness and inherent potential of genius for clarity. This is the Path of Return.

We've had glimpses of a way of being human that embodies rare integrity, freedom, wholeness and beauty--and we dream of the life and world that could result from sustaining that ideal. Most of us are held back from our greater potential by a deep-rooted undertow pulling us down from the heights we could achieve. This persistent barrier to our optimal growth is the ancient, hardwired programming of our evolutionary past, the "software" of our primitive ancestry.

We operate (often unconsciously) from "inherited" instincts, assumptions, and responses that have been encoded into humankind for millennia--vestiges of an ancient animal past.

These unproductive patterns form an invisible ceiling preventing us from reaching our true potential. In fact, this innate and primitive "conditioning" is the key reason that most of our efforts at change fail--whether as individuals or as a society.

The key to breaking this "sound barrier" in consciousness is learning how to awaken and activate a latent spiritual capacity. It lives within each of us, but often remains dormant, just beneath the surface of our awareness. This often hidden dimension of our being is a boundless source of inspiration, passion, creativity and clarity--and when we learn how to tap into it, we rapidly find ourselves on the other side of everything that previously stood in our way.

In human genetics, Mitochondrial Eve is the matrilineal most recent common ancestor (MRCA), in a direct, unbroken, maternal line, of all currently living humans, who is estimated to have lived approximately 100,000–200,000 years ago. This is the most recent woman from whom all living humans today descend, in an unbroken line, on their mother’s side, and through the mothers of those mothers, and so on, back until all lines converge on one person. Because all mitochondrial DNA (mtDNA) generally (but see paternal mtDNA transmission) is passed from mother to offspring without recombination, all mtDNA in every living person is directly descended from hers by definition, differing only by the mutations that over generations have occurred in the germ cell mtDNA since the conception of the original "Mitochondrial Eve".
Mitochondrial Eve is named after mitochondria and the biblical Eve.[2] Unlike her biblical namesake, she was not the only living human female of her time. However, her female contemporaries, excluding her mother, failed to produce a direct unbroken female line to any living person in the present day.
Mitochondrial Eve is estimated to have lived between 99,000 and 200,000 years ago,[3][4][5] most likely in East Africa,[6] when Homo sapiens sapiens (anatomically modern humans) were developing as a population distinct from other human sub-species. 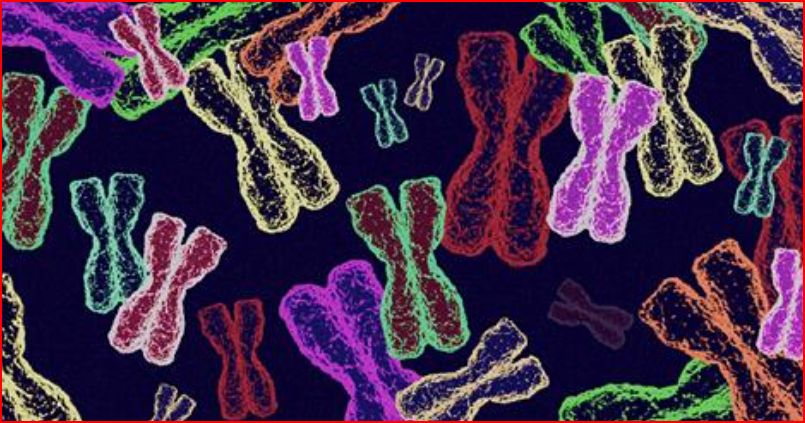 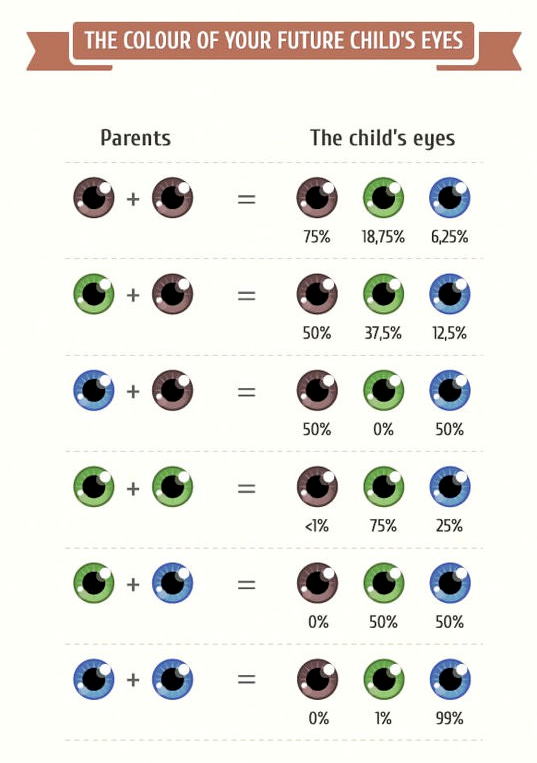 Copyright © 2013-2015, Iona Miller,
All Rights Reserved, Sangreality Trust; GenIsis Genealogy
on all graphic and written content.
If you mirror my works, pls include the credit and URL LINK for reference.
iona_m@yahoo.com
http://ionamiller.weebly.com

Fair Use Notice
This site contains copyrighted material the use of which has not always been specifically authorized by the copyright owner. We are making such material available in our efforts to advance understanding of environmental, political, human rights, economic, democracy, scientific, and social justice issues, etc. We believe this constitutes a 'fair use' of any such copyrighted material as provided for in section 107 of the US Copyright Law. In accordance with Title 17 U.S.C. Section 107, the material on this site is distributed without profit to those who have expressed a prior interest in receiving the included information for research and educational purposes. If you wish to use copyrighted material from this site for purposes of your own that go beyond 'fair use', you must obtain permission from the copyright owner.