Generational Theory
Generational Archetypes
Authors William Strauss and Neil Howe created the Strauss-Howe generational theory. It identifies a recurring generational cycle in the last five centuries of Anglo-American history. It can be explained by four generational archetypes that repeat sequentially in a fixed pattern every 80-100 years. This is the unfixed length of a long human life the ancients called a “saeculum," which can be divided into four "seasons" of approximately 22 years each; these seasons represent youth, rising adulthood, midlife, and elderhood.

Basically, this sociological generational theory describes how the era a person was born into affects the development of their view of the world. Our value systems are shaped in the first decade or so of our lives, by our families, our friends, our communities, significant events and the general era in which we are born.

Traditional cultures viewed time as cyclical, much as the waxing and waning of the moon, the rising and setting of the sun, the birth and death of living creatures, the planting and harvesting of crops, and the seasons of the year. The idea of sacred time as an eternal round and the symbol of the ring or wheel are cross-ccultural symbols. There is a repeating cycle in historical generational values. Each 20-year long generation faces similar issues and experiences.
http://www.tomorrowtoday.uk.com/articles/article001_intro_gens.htm

Social Cycle Theory
[Each] 80 year period of human history, we start with a crisis period, when society has to stop and deal with an issue that actually changes institutions and structures. Children born during such a time grow up to be like the Silent generation of today. This is followed by an outer directed and driven period of rebuilding, with grand visions and big dreams, giving rise to a Boomer-like generation. This idealistic world cannot be sustained, however, and a period of disillusionment and breaking down follows, with society being reconfigured and adjusted. The children of this era grow up to be like Generation X is today. This era is followed by an inner-directed era, where leaders, institutions and society itself focuses on consolidating and building new foundations, rebuilding institutions and protecting the young. This era gives rise to the type of people who are from the GI generation and the Millennial generation today. Finally, this inner-directed focus cannot be maintained, and a crisis occurs, sparking a new cycle.

If this is correct, then generational theorists are expecting a major crisis to hit global society in the next few years. This is something that will cause society to stop, reconsider and reconstitute itself.
http://www.tomorrowtoday.uk.com/articles/article001_intro_gens.htm

While they focus on the history of the United States, including the Colonial era and British antecedents, they also find similar generational trends around the globe from the late Medieval period. They have defined generational archetypes in cohort groups that express the zeitgeist of their times. While such attributions are arguable they can provide a touchstone for certain eras and their collective culture.
http://www.lifecourse.com/about/method/generational-archetypes.html

They group four generations into a series of 80-year cyclic 'turnings' that include an initial 'high', followed by 'awakening,' unraveling,' and 'crisis.' Their archetypes include 'prophet,' 'nomad,' 'hero,' and 'artist' generations. We can think of such themes as collective dreams. Repeating cycles are a common theme for both individuals and whole generations.

As is the generation of leaves, so to of men:
At one time the wind shakes the leaves to the ground
but then the flourishing woods
Gives birth, and the season of spring comes
into existence;
So it is with the generations of men, which
alternately come forth and pass away.
– Homer, The Illiad, Book Six

We might benefit from the generational method in formulating our own Big Picture, as well as broad-stroke insights for our own generation within the pattern. The theory contends that each new generation entering a specific lifestage will redefine that lifestage and change it either subtly or dramatically. As generations clash there is a collision of values, expectations, ambitions, attitudes and behaviors -- the generation gap.
https://en.wikipedia.org/wiki/Strauss%E2%80%93Howe_generational_theory 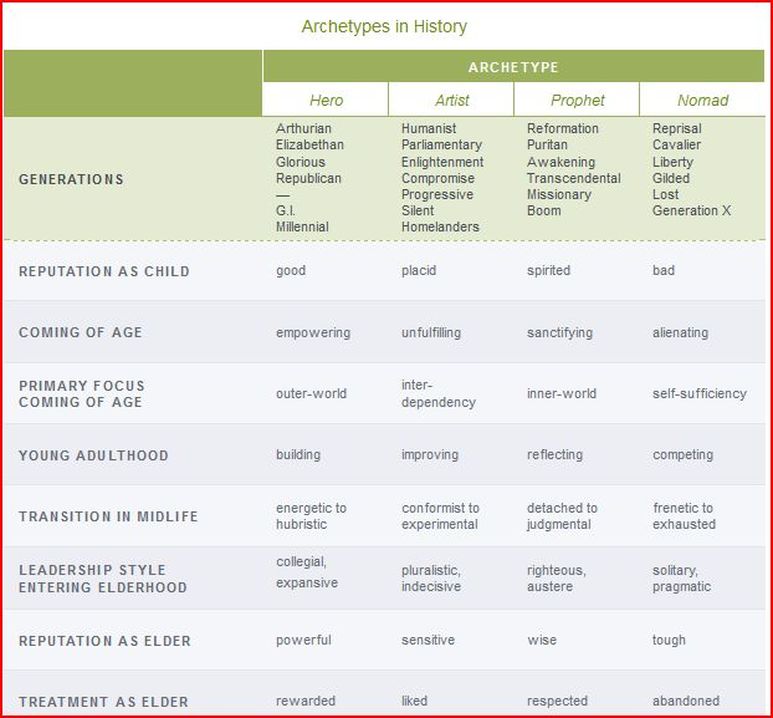 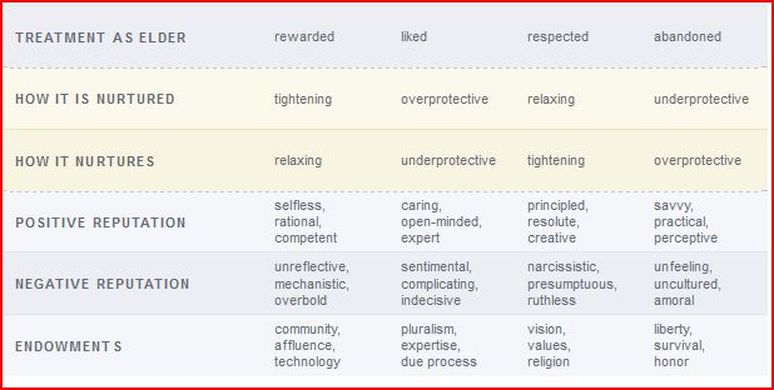 (c)2015-2016; All Rights Reserved, Iona Miller, Sangreality Trust
iona_m@yahoo.com
Fair Use Notice
This site contains copyrighted material the use of which has not always been specifically authorized by the copyright owner. We are making such material available in our efforts to advance understanding of environmental, political, human rights, economic, democracy, scientific, and social justice issues, etc. We believe this constitutes a 'fair use' of any such copyrighted material as provided for in section 107 of the US Copyright Law. In accordance with Title 17 U.S.C. Section 107, the material on this site is distributed without profit to those who have expressed a prior interest in receiving the included information for research and educational purposes. If you wish to use copyrighted material from this site for purposes of your own that go beyond 'fair use', you must obtain permission from the copyright owner.